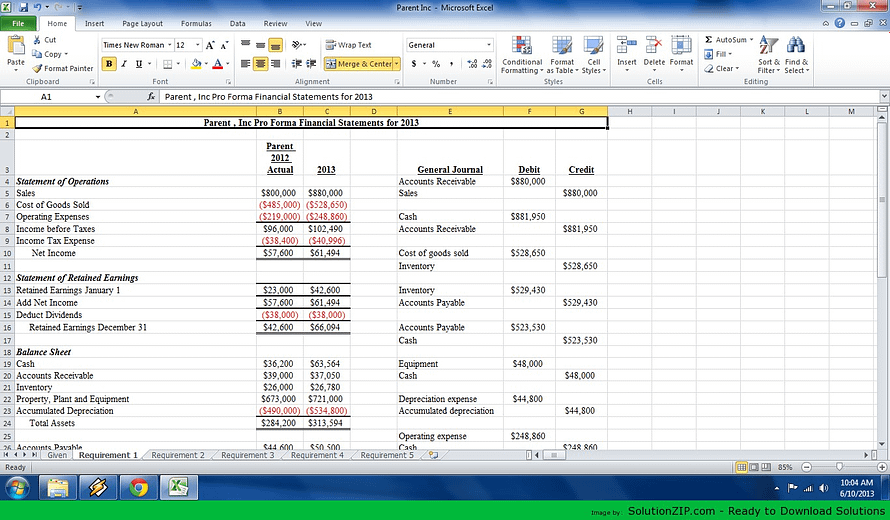 Assumptions
1.Sales will increase by 10% in 2013.
2.All sales will be on account.
3.Accounts receivable will be 5% lower on December 31, 2013, than on December 31, 2012.
4.Cost of goods sold will increase by 9% in 2013.
5.All purchases of merchandise will be on account.
6.Accounts payable are expected to be $50,500 on December 31, 2013.
7.Inventory will be 3% higher on December 31, 2013, than on December 31, 2012.
8.Straight-line depreciation is used for all fixed assets.
9.No fixed assets will be disposed of during 2013. The annual depreciation on existing assets is $40,000 per year.
10.Equipment will be purchased on January 1, 2013, for $48,000 cash. The equipment will have an estimated life of 10 years, with no salvage value.
11.Operating expenses, other than depreciation, will increase by 14% in 2013.
12.All operating expenses, other than depreciation, will be paid in cash.
13.Parent’s income tax rate is 40%, and taxes are paid in cash in four equal payments. Payments will be made on the 15th of April, June, September, and December. For simplicity, assume taxable income equals financial reporting income before taxes.
14.Parent will continue the $2.50 per share annual cash dividend on its common stock.
15.If the tender offer is successful, Parent will finance the acquisition by issuing $170,000 of 6% nonconvertible bonds at par on January 1, 2013. The bonds would first pay interest on July 1, 2013, and would pay interest semiannually thereafter each January 1 and July 1 until maturity on January 1, 2023.
16.The acquisition will be accounted for as a purchase and Parent will account for the investment using the equity method. Although most of the legal work related to the acquisition will be handled by Parent’s staff attorney, direct costs to prepare and process the tender offer will total $2,000 and will be paid in cash by Parent in 2013.
As of January 1, 2013, all of Subsidiary’s assets and liabilities are fairly valued except for machinery with a book value of $8,000, an estimated fair value of $9,500, and a 5-year remaining useful life. Assume that straight-line depreciation is used to amortize any revaluation increment.

No transactions between these companies occurred prior to 2013. Regardless of whether they combine, Parent plans to buy $50,000 of merchandise from Subsidiary in 2013 and will have $3,600 of these purchases remaining in inventory on December 31, 2013. In addition, Subsidiary is expected to buy $2,400 of merchandise from Parent in 2013 and to have $495 of these purchases in inventory on December 31, 2013. Parent and Subsidiary price their products to yield a 65% and 80% markup on cost, respectively.

Parent intends to use three financial yardsticks to determine the financial attractiveness of the combination. First, Parent wishes to acquire Subsidiary Corporation only if 2013 consolidated earnings per share will be at least as high as the earnings per share Parent would report if no combination takes place. Second, Parent will consider the proposed combination unattractive if it will cause the consolidated current ratio to fall below two to one. Third, return on average stockholders’ equity must remain above 20% for the combined entity.

If the financial yardsticks described above and the nonfinancial aspects of the combination are appealing, then the tender offer will be made. On the other hand, if these objectives are not met, the acquisition will either be restructured or abandoned.