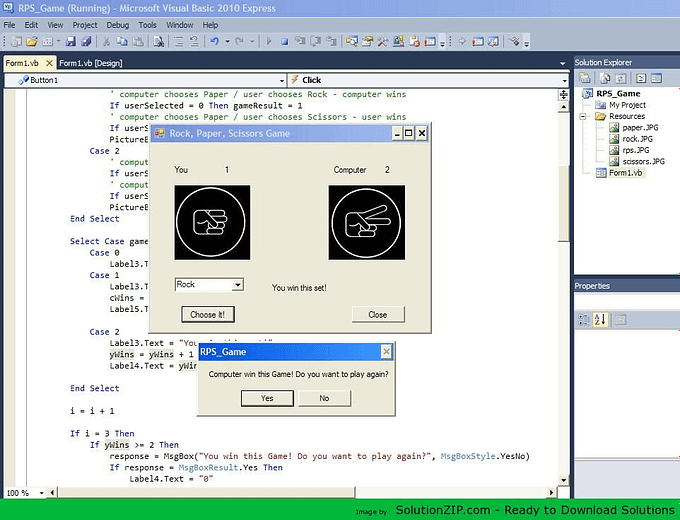 Rock, Paper, Scissors Game in Visual Basic 2010 Create an application that lets the user play the game of “Rock, Paper, Scissors” against the computer. The program should work as follows: 1. The winner of the game is the one who has the won the most of three matches. 2. When the program begins, a random number in the range of 1 through 3 is generated. If the number is 1, then the computer has chosen rock. If the number is 2, then the computer has chosen paper. If the number is 3, the computer has chosen scissors. (Don’t display the computer’s choice yet!) 3. The user clicks a button to select his or her choice of rock, paper, or scissors. 4. The computers choice is displayed. 5. The winner is selected according to the following rules: a. If one player chooses rock and the other player chooses scissors, then rock wins. (Rock smashes scissors.) b. If one player chooses scissors and the other player chooses paper, then scissors wins. (Scissors cuts paper.) c. If one player chooses paper and the other player chooses rock, then paper wins. (Paper covers rock.) d. If both players make the same choice, the game must be played again to determine the player. 6. Display the result of the match (in either a text box or dialog box). 7. Display the result of the game when 3 matches have been played (either in a message or a dialog box). 8. The game should have a “Play Again” button that resets the entire game.
Whats expected of this Rock, Scissors, Paper application.
GUI
Loop 3 times
Increment wins
Random Function
Nested IF or Switch Statement
Click Event to Display Computer’s Choice
Message to display Winner of Match
Message to display Winner of Game
Reset Game